FunPlus Phoenix is the eighth founding team of the league, which costs $2 million (£1.55 million) to buy in to.

FunPlus Phoenix has reportedly acquired the roster that previously represented Danish organisation Heroic – the team is ranked #14 in the world in HLTV.org’s system. Heroic is set to compete in the eleventh season of the ESL Pro League but, if the report is true, it’s unknown if the organisation will have a roster to field in the competition.

Kent Wakeford, Co-founder of Gen.G esports, spoke on welcoming his team’s rival from League of Legends to FLASHPOINT: “FunPlus Phoenix and Gen.G have a fierce rivalry in League of Legends, so we’re extremely excited to welcome them into Flashpoint and compete with them in CS:GO. This will raise the level of competition and create the kinds of epic matches that fans won’t want to miss.”

RELATED: FLASHPOINT gets inside track with Pinnacle partnership

Envy Gaming, the parent company of Team Envy, bought into FLASHPOINT earlier this month, making it the seventh founding team of the league.

The original six founding teams of FLASHPOINT are Immortals Gaming Club (owner of MIBR), OverActive Media (owner of MAD Lions), Cloud9, Gen.G, Dignitas, and c0ntact Gaming. Copenhagen Flames, Chaos Esports Club, HAVU, and Orgless will round out the league for its first season.

Esports Insider says: It’s interesting to see FunPlus Phoenix, whose fan base has never been stronger after winning the League of Legends World Championship last year, acquiring an all-Danish roster and buying into a title that’s much bigger in the West than the East. We’re intrigued to see how FLASHPOINT is executed. 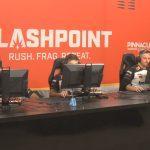