Greg Leung had worked at Apple for years and was coming off of a stint at the smart lock company Otto, when he got the call to interview with Connect Homes.

The pitch — building a starter home for a much lower cost than other prefabricated houses on the market, and one that could be dropped in to locations in the urban core of most cities — was too good to pass up.

“Basically, it’s a beautiful product, but done in a way that disrupts and transforms the way homes are built,” said Leung.

The homes come in 14 standardized configurations and can scale from 460 square foot up to 3200 square feet. What differentiates the company from its competitors, says Leung, is the speed with which Connect Homes can build a house, putting up a full house in six days.

Not only that, but the homes are able to use standard shipping networks and rail transit to bring their homes anywhere in the country. “We build modules the size of a shipping container, so we can connect to the regular intermodal shipping network,” Leung said. 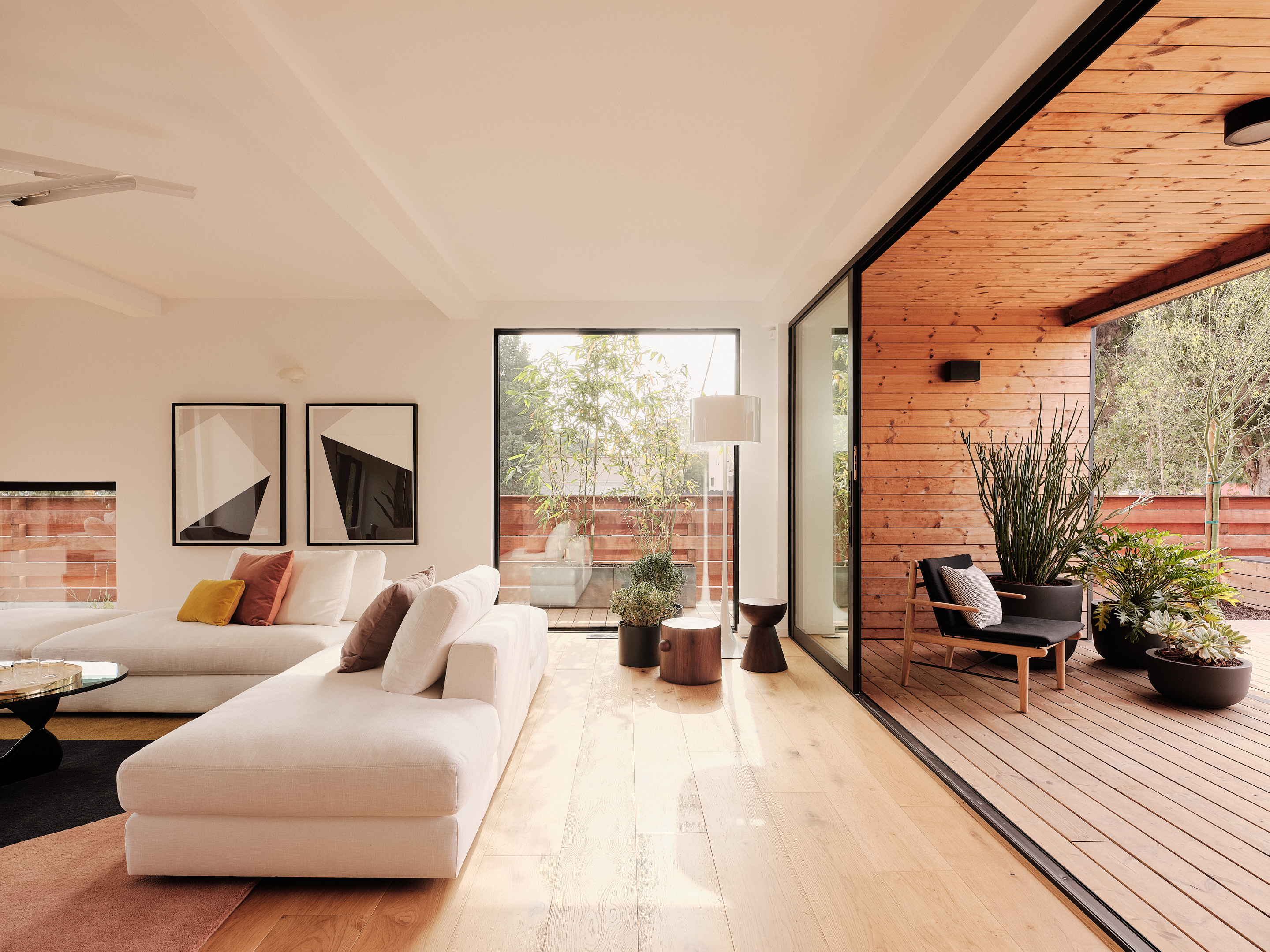 “What we’re doing is providing a beautiful, modern, product for half the price of a traditional custom homebuilder,” he said.

Currently, Leung said, there are three types of new construction getting build — new tract homes; multi-family housing units, and high rises. But, there’s an opportunity to infill housing. “70% of the Bay Area and LA were built in the 70s. That means there are millions of homes that are too small and out of date and energy inefficient,” Leung said. “It costs $1 million to $1.5 million to build a home… No one is addressing the urban infill market except for us.”

And Leung’s interest extended beyond the 88 projects that the company has completed for new homeowners. From its Los Angeles headquarters with a factory in San Bernadino, Calif., the company is also looking to change how municipalities and governments think about temporary shelters and living spaces for the unhoused.

Founded by Jared Levy and Gordon Stoddard, two architects who worked in the pre-fabricated building division of the firm Marmol Radziner, Connect Homes had raised $27 million to build out a vision of pre-fab future.

That capital includes a recent $5 million round that served to reboot the company and refocus it around its manufacturing technology that can create deployable shelters alongside its housing work. That was another draw for Leung, whose experience in Northern California made him acutely aware of the housing problem the nation faces.

The single module shelter that the company has developed can be transported and put on site in one day. Adding a generator to the 40 foot by eight foot module the company is building means that the shelter has the flexibility of a trailer, but can be ready for habitation in 24 hours.

“We designed this to sell to municipalities and third party service provider to house people,” Leung said.

Customers for the new product include the Thatcher School in Ojai and a project in Mountain View, Calif. done in partnership with Life Moves.

Still, the company’s fancy replacements for tent cities don’t do anything to address the underlying housing crisis that cities across the country.

“We’re trying to be the opposite of bespoke housing that we see as part of the problem. The shelters was a reaction to an urgent need. We had the ability to do something innovative to solve the problem,” said Leung. “I don’t see the amazing talent and innovation being applied to this problem. And it’s affecting the well-being and health of millions and millions of people… This is something that will last for possibly lifetimes.” 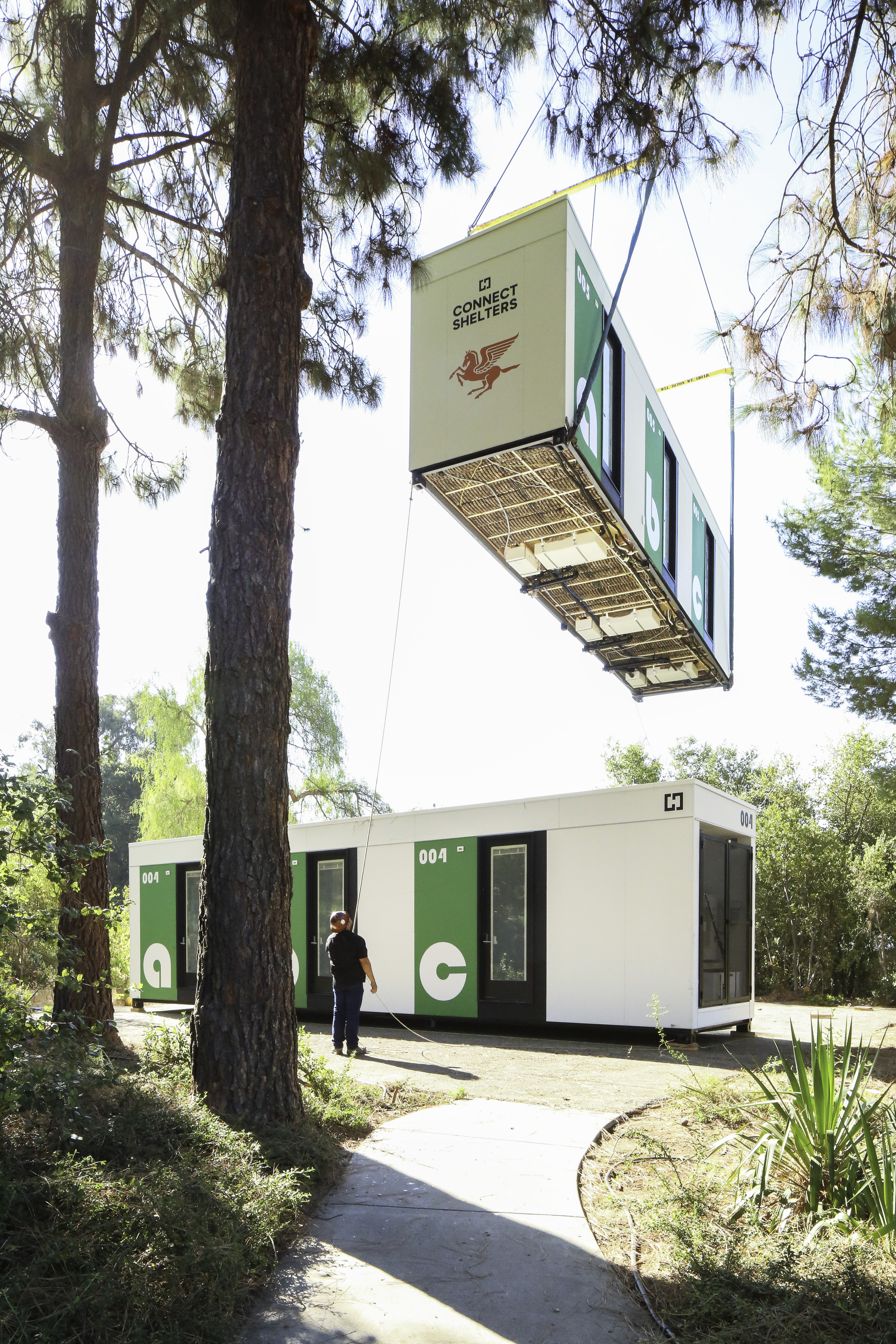 The attempt to create a new fable for the reconstruction of the building industry is what drew Brick & Mortar Ventures back to the table to recapitalize the company with the new $5 million in cash the company recently secured, according to Darren Bechtel, the founder and managing director of the firm.

A scion of the Bechtel engineering and construction family, Bechtel has a deep knowledge of the industry and sees Connect Homes as one of the best bets to disrupt traditional construction.

“You cannot construct today cheaper than existing assets,” Bechtel said. But, the opportunity to rethink construction as manufacturing is creating an environment that can drive down costs more effectively, he said.

“It’s been a primitive form of manufacturing for some time,” Bechtel said of the housing industry. “The difference from traditional manufacturing and even automobiles, is that when you get to the scale of a house, you exceed the ability to transport that product efficiently from the manufacturing site to the end delivery site.”

That’s the key problem that Bechtel saw Connect Homes solving. “You have to standardize around intermodal shipping or you have to get permits. You are limited on which roads you use,” he said. “If you’re doing a true kit of parts, you’re requiring craft workers to do the finished work on site.”

Connect Homes, said Bechtel, is taking a different approach from the homebuilders that are looking to be mostly vertically integrated. He said Connect Homes was taking a more Apple-like approach where they oversee the product lifecycle and the customer experience. “That’s how you reach global scale and create the VW and Audi of housing,” he said. “A house is the most expensive purchase. The fact that this is still a bespoke product in the vast majority of scenarios doesn’t make sense.”

Bechtel also drew a distinction between the companies that are primarily targeting the accessory dwelling unit market in California and Connect Homes, which has broader aspirations.

“A lot of people who are buying and selling ADUs are getting an extra guest house. They want more space for themselves,” he said. “At a much larger scale if you can take existing housing stocks that are in medium or high density areas that are old properties with larger footprints and you can create two or three housing units in the same spot with new inventory, you’re drastically improving both the quality and the quantity of housing stock.”

That’s the ultimate goal, for Connect Homes, Bechtel said. And it’s going to be returning to market just as that market could be poised to rebound, said Bechtel.

“We believe you’re going to see a massive rebound in the need for housing,” said Bechtel. “The single family housing market will return.” And when it does, Connect Homes will be working on scaling up to meet the new demand.

Construction tech startups are poised to shake up a $1.3-trillion-dollar industry

Read the original post: With new cash and a former Apple exec now at the helm, Connect Homes is ready to reconstruct homebuilding