It was only relatively recently, in October 2018, that TechCrunch held Startup Battlefield MENA to unpack startups in the Middle East and North Africa. When TechCrunch went looking for a city in the region to host the event in, it quickly became clear that Beirut was the one for us. Vibrant, full of creative entrepreneurs, and a fantastic startup scene made it a natural TechCrunch choice.

That year Beirut came into its own as a tech cluster, with the ongoing emergence of the Beirut Digital District, Antwork and similar initiatives and spaces in the city.

Beirut has created many standout startups including Instabug and MYKI, as well as local VC funds including BeryTech Fund and Leap Ventures among others.

Startup Battlefield MENA was a huge success and helped shine a light on that ecosystem.

But it goes without saying that both Lebanon’s financial and political crisis last year, combined with the COVID-19 pandemic, has hit Beirut very hard.

We have therefore witnessed the explosion yesterday, which devastated the city and so many lives, with enormous sadness. Our hearts go out to everyone there.

This will be kept as a rolling list of updates and stories from the tech enthusiasts, entrepreneurs and investors in a city that is close to TechCrunch’s heart and will be updated as we get information, and put into sections.

Any tech founders or investors in Beirut can email me a statement about how they are doing, if they are well, how their team are doing, if their office was damaged, etc. Any stories AT ALL can be sent to mike [AT] mikebutcher.me and I will assemble them for publication here. Put “Beirut” in the subject line.

FINANCIAL DONATIONS:
You can donate to the Disaster Relief Fund, Lebanese Red Cross and others here.

Lebanese Red Cross donations should be done on desktop (not mobile as their app has some glitches).

Impact Lebanon, a nonprofit organization, is a social incubator for driven Lebanese around the world and is raising a crowd-funder here.

Stanford Business School students and alums have rallied together to launch a GoFundMe campaign.

Life Lebanon is a relief fund created by the Lebanese in Finance organization (a serious organization formed of expats mostly in the U.K. and U.S.)

VOLUNTEERING:
Offre-Joie is an organization that is very respectable and has done good work in reconstruction post-civil war, it’s now seeking volunteers and raising a relief fund here.

MEDIA / INFORMATION:
• The961 is one of the leading Lebanese English media/news sites and one of the handful of independent and non-politically backed media outlets in the country, launched by Anthony B. Kantara. They are working with a few full stack developers, Gabriel Nazi, Elias El Teeny, and Jean Claude Aoun from the dev community in Lebanon to develop a platform where people can submit missing people and their info. It will be set up directly on The961.com as an extension to the news site. It also launched a fundraiser for the Lebanese Red Cross through their NGO (legally registered in Canada).

• In the coming days it will be worth watching Ghayd Chammas, the man behind @El_3ama, who is a social/political activist and full-time comic who won’t be letting the government rest.

• Mysayapp.com is a regional startup offering gamified polling and statistics for Lebanon. They are contributing their platform running a damage assessment survey mapping the explosion’s intensity, physical damage, population mental health and material damage. They will also run a needs assessment survey to share with international donors.

• Business Empower is a Beirut-based technology company that offers e-commerce, data analytics, security and cloud solutions for several local and multinational companies. The business has sustained significant damage from the event. It was established in 2008 by founder Mouhammad Fakhoury. Fakhoury, a Syracuse University alumni and previous Software Engineer at Adobe Systems and Microsoft, moved to Lebanon to start his own company. Thankfully no one was physically hurt; employees were working remotely due to COVID-19 restrictions.

• Letsbot.io has more than 1,300 upskilled Lebanese freelancers from underprivileged communities on their platform but “with the recent explosion and devastation that happened, we fear the worst.” They provide outsourced digital services remotely for companies outside of Lebanon and provide data collection and survey services for NGOs in Lebanon. They say they “cater clients in e-commerce product listing services as well as AI data training services with a massive managed workforce and with a guaranteed high-quality delivery system built in place to provide optimal delivery in each job.”

STORIES FROM THE GROUND: 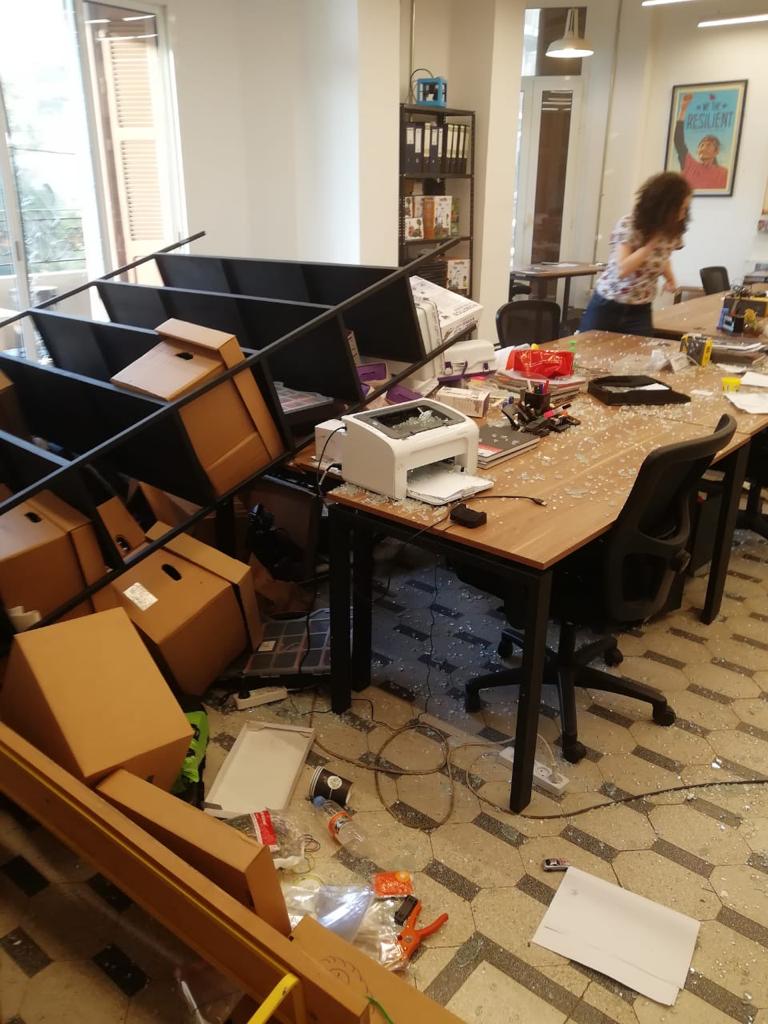 • Sophie Ghaziri and Rayan Najdi of Geekexpress.com write:
“We are based in antwork ‘Geek Express’ and our offices were hit. We had a couple of employees in the office at the time but we are all safe. However, this blast has set us back even further than corona and the economic crisis.”

• Entrepreneur Omar Itani: “Yesterday I lost a lot … my car, my house, my phone, one of our shops. The shop was inaugurated less than three months ago, we have poured hundreds of hours of work into the shop and invested thousands and thousands of dollars. Since its opening, the shop has been doing tremendously well and became one of the city’s fashion landmarks. Today the shop is only a memory, nothing remains, all vanished in a second.” Read here.

• Jean Bou Rjeily, Co-Founder of CME Offshore writes: “CME (www.gotocme.com) is a multinational technology company that provides end-to-end hardware and software business solutions, with 185 software engineers working from Beirut. Only the team members who live near the explosion area were impacted when the blast hit, and a few had to relocate. However, we were all emotionally affected and found ourselves coping with an unexpected crisis layered on top of the pandemic and the country’s economic challenges. In these unprecedented times, our team members showed solidarity with each other and with the community. Many volunteered in cleaning the streets and clearing away debris with the full support of the company. Today, our day-to-day activities are little disturbed. We have our sleeves rolled up. Standing for each other motivates us and boosts our confidence that Beirut will rise from the ashes, again.”

• Firas Abdallah is the founder of Ur My Type, a bootstrapped startup creating a personality-based dating app. This is his story:

“I am very lucky to be alive today. I was sitting on my laptop on the 10th floor in a building about 500 meters away from the blast. When the blast hit, I was thrown a few meters out of my seat and immediately felt blood coming out of my head. I also felt I was ‘missing’ a piece of my head when I placed my hand on the bleeding part. I didn’t lose consciousness, so I kept hope that I didn’t fracture my skull or actually hurt my brain. The floor above us collapsed onto our apartment and everything was a wreck. I grabbed my girlfriend, my shoes and my phone and immediately went out and took the stairs.

I had initially thought that the explosion happened in my building, so I knew we needed to get out ASAP before there was another explosion or before the building collapsed. As soon as I got out, I saw an unimaginable amount of destruction. I tied my T-shirt around my head to try and stop the bleeding, as I knew I was going to have to walk a long way to find my way out of the rubble and receive medical treatment. After 45 minutes of walking and bleeding around 1-1.5 litres of blood, we found my brother in his car about 3 km away. The bleeding had slowed down at this stage, so I asked him to take me to the local hospital in my town in the mountains (around 1 hour away), as I knew all the hospitals in Beirut were going to be overloaded, and I might bleed out before getting the help I needed if I tried to get into a Beirut hospital.

After getting to the local hospital, I was immediately tended to by the surgeon, who basically told me that I had a massive wound in my head, deep to the skull, which was clearly visible, but that the skull didn’t break. He stitched my cut temporal artery and closed the wound in my head with about 30 stitches. And then the scans showed that indeed both my skull and my brain were intact and unaffected. So despite the serious injury, I didn’t hurt anything that wouldn’t heal with time. I felt very, very lucky. Unfortunately, the security guard in the Beirut building I was in didn’t make it. I had known him for a long time and he had always been kind and helpful, and he had helped my girlfriend tremendously during a serious accident that happened to her in the apartment last year. Today I found out he was actually from my town.

The whole thing is surreal, and I don’t think I have fully processed it yet. I don’t feel any form of anxiety, sadness, depression or trauma, but I do have the scene of the blast repeating in my mind when I go to sleep. After recovering, I want to take my team of three and leave this country for good. Life is too precious for us to continue suffering here.”

Read the original post: Rolling updates on Beirut, a city and a tech community devastated